A Scandal and the Angel of Death in Sheen

Caroline Swan at Flickering Lamps recently wrote a fascinating post about East Sheen Cemetery and the Angel of Death, the incredibly beautiful sculpture marking the resting place of George and Louisa Lancaster.

Would you guess that this grieving angel guards the resting place of a couple who had — or at least George had — a scandalous secret? 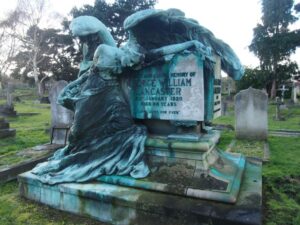 “Cast in bronze,” Caroline writes, “the sculpture of the grieving angel was created by Sydney March, who was also responsible for a number of war memorials around England in the years after the First World War. He also collaborated with his similarly artistic brothers and sister to create the National War Memorial of Canada.”

According to the author, the people whose final resting place is marked by the spectacular tomb seem at first glance to have been simply a wealthy couple, with George Lancaster’s money having been made through mining interests in his native Lancashire. However, it was only after Louisa’s death that something of a scandal was revealed about her relationship with George. It appears that both were married when they began their relationship — however, while Louisa’s husband divorced her, George was only separated from his wife, never divorced.

Despite this, George and Louisa set up home as man and wife and were even recorded as being married on the 1901 census. They had never been legally married, and after Louisa died George’s legal wife Emily took Louisa’s son Arthur to court, accusing him of falsifying his mother’s details when registering her death. Louisa inherited the majority of George’s wealth upon his death, with only a much smaller amount going to the legal Mrs Lancaster — which may have been the cause of the lawsuit.