At Elmwood Fencing, unlike for most of us, they do not dread bad weather.

They have learned over the years that storms and gales are actually good for business. 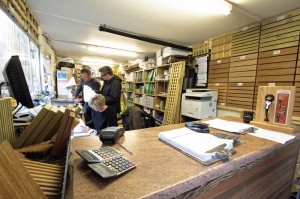 For example, the strong winds of last winter blew down or damaged fences in hundreds of local gardens and the firm’s staff worked flat out doing repairs.

“Ours used to be a very seasonal business but now we are busy all year round,” says Christopher Mold who runs the premises beside Mortlake Station in Sheen Lane.

Though located on only a small site, the firm generates enough work to keep eight full-time staff occupied. They include office staff, two in the workshop, and two teams who go out to do repairs or install new fencing wherever it is required. 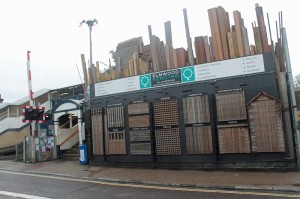 “Construction used to be the biggest part of our business, but in the last 10 years the retail side has snowballed and become larger,” adds Christopher.

This has been driven by the large number of landscaping firms in West London, many of whom prefer to use Elmwood for their fencing supplies, and by local residents keen to try a bit of DIY on their garden fences.

But Christopher is still out of the office up to three days a week seeing customers and putting together quotes for work.  His firm covers a surprisingly large area and is prepared to send its teams up to 15 miles away on jobs.

By far the most popular garden fences are traditional closeboard panels or woven wooden panels, both made of pressure-treated soft woods. Most of this stock is manufactured in Birmingham using timber cut from Cannock Woods. Likewise, the fence posts sold by Elmwood are home produced in Norwich using timber from Thetford Forest.

“We have been using these two sawmills for many many years because they produce a quality product and can guarantee our supplies,” adds Christopher. This is an important factor because following last winter’s storms when demand peaked superstores ran out of fencing for months, but not Elmwood.

The firm was founded in 1977 by Christopher’s uncle Les and was based in Putney Bridge Road.  He joined the firm when it moved to Sheen Lane in 1990.

Longevity is the hallmark of the staff. Company Secretary Lesley, who works in the office, has been with the firm for 32 years, and likewise, several other employees have over 30 years service.

Elmwood has a high reputation and was recently commissioned to construct some replacement interior trellis covers made from cedar for Kensington Palace. “This was a special job we were pleased to do,” said Christopher.

He adds that wooden fencing has not changed much over the years, apart from the preservatives used to make the wood last longer. “Creosote is banned now because of its carcinogenic qualities and various other safer chemicals have been developed,” he says

Plastic fencing is available nowadays, but he is not impressed by either its appearance or durability. “Wooden fencing looks good and will last a long time if properly looked after,” he says. “We have a customer in Putney whose fencing we installed 32 years ago and it’s still going strong.  I was amazed recently by how good it still looks.”

He adds:”The more you treat your fencing with preservative, the longer it lasts. It’s also crucial to let it dry out before winter rains. Too many gardens have spraying systems which saturate the fencing, and if it doesn’t dry it will rot.”