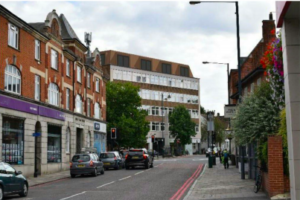 Architect’s impression (mobile masts will be on top)

Local resident Aisling writes: “Unbeknownst to most of us in East Sheen, the owners of Parkway House, the 1960’s office block in the heart of East Sheen applied last year to put an extra storey on their 5-storey office block.

The Council rejected the application last January, but the owners have now appealed to the Secretary of State. This is your last chance to comment, and it must be done by 5pm on 7th November.

The Council’s position is that “this building … is already by far the largest and highest building in the locality… the inappropriate and incongruous design, bulk, mass and scale on the roof of a prominent building would have a detrimental impact on the character and appearance of the street scene and the setting of the immediately adjacent Mortlake Sheen Conservation Area”. It also referred to the plan (a mansard roof) as looking “clumsy”. The council’s urban design officer said the proposal was “completely unacceptable” as the building is already overscaled.

However, the application passed many technical tests – it provides desired extra office space, and has jumped through the hoops regarding light-blocking, overlooking of neighbours and parking spaces. 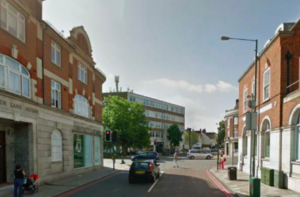 If you want to comment (and you can just write a few words if you don’t have much time), you can go directly to the planning inspectorate here, and click on “Make Representation”.

Writing to your MP, Zac Goldsmith, is also a good idea.

If you want background, you can read the planning officer’s report, which summarises the application and the points in favour of and against it, see here.

For the full whammy look here. I’m told the appeal documents will be added to this collection soon.