A local community group has formed to tackle the growing amount of litter strewn by users who travel along the Barnes Towpath and the huge volume deposited by the tides. The Barnes Tidy Towpath Group is made up of local residents who are passionate about their community, the towpath and nearby waterways. 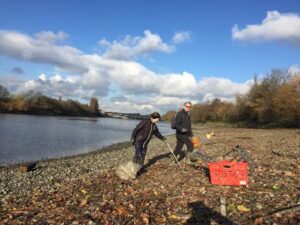 Concerned about the growing amount of litter being dropped along the towpath, they have formed to take action and responsibility in their community. With support from the Council’s Parks service and SWLEN they have now become a recognised group, with their own website and email.

Since launching, they have worked with local organisations, including the Council, Thames21 and the Friends of Barnes Common, on awareness campaigns and running group litter pick sessions.

To assist them, the Council has installed additional bins and donated litter picking sticks, gloves and bags. They are now collecting in the region of three large bags of general and recyclable litter each week along the towpath and six full bags by the bench at Hammersmith Bridge.

However, the amounts they collect vary greatly depending on tides, season/weather and location. During a recent three-hour session, 11 volunteers amassed 12 bags of general rubbish and two of recyclables in the 1/4 mile stretch of the towpath from Barnes Bridge to the White Hart Pub, much of which was micro plastics washed up by the tide.

Despite their efforts, litter is still being dropped along the towpath and together with the Council, they are now calling on residents to be more respectful of our borough. Petra and Ann from the Barnes Tidy Towpath Group said: “We ask all who use the towpath, especially regular dog walkers, walkers, runners, if they could also do their bit by picking up that odd wrapper, bottle or poo bag. If everyone took that small step – or even better, took a spare bag with them to pick up more – we could keep on top of the litter and protect this beautiful open space.”

If you want to join their sessions: they generally have one Saturday and some mid-week morning sessions each month. As they are greatly impacted by the tide, the time and meeting points may vary. Once they have assessed the situation, details are confirmed on their website and via email if you’re on their list.