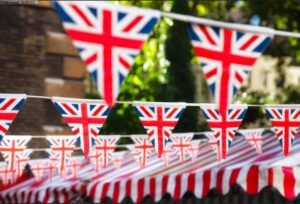 Britain is hanging out the bunting in preparation for a weekend of celebrations to honour the Queen’s Platinum Jubilee.

A host of events are planned nationwide, while thousands of communities are throwing their own Jubilee parties and activities to mark her Majesty’s 70 years on the throne.

Here’s all your need to know about joining in the celebrations.

When are the Jubilee bank holidays?

The UK has been given an extra day off on Friday, June 3 which is being tagged on to a later than usual May bank holiday which is now on Thursday, June 2. Events will take place throughout the weekend.

More than 1,400 parading soldiers, 200 horses and 400 musicians will come together on June 2. You can watch the parade from 10am as it moves from Buckingham Palace, down the Mall to Horse Guard’s Parade, joined by members of the Royal Family on horseback and in carriages. The Parade will close with the traditional RAF fly-past, watched by the Queen and members of the Royal Family from the Buckingham Palace balcony. If you can not get there in person, it will be broadcast on BBC One.The fly-past by the Royal Air Force takes place at 1pm and can be watched from The Mall.

Royals join in the Big Lunches

Members of the royal family are to share friendship, food and fun at special lunches to celebrate the Queen’s 70-year reign.

The Prince of Wales and the Duchess of Cornwall will meet guests at a feast at The Oval cricket ground in south London, while the Earl and Countess of Wessex will join members of the local community in Windsor.

The Platinum Pudding, Scotch eggs and fruit platters will feature on a six-metre felt creation by artist Lucy Sparrow which is to be viewed by Charles and Camilla at The Oval.

The royal couple will also present the Platinum Champions with certificates and pins, before cutting a Big Jubilee Lunch cake.

The Pageant on Sunday will combine street arts, theatre, music, circus, carnival and costume. The ambitious £15 million pageant is split into four acts: For Queen and Country with a military parade; The Time of Our Lives progressing through seven decades of culture, music and fashion; Let’s Celebrate telling the story of the Queen’s life in 12 chapters with corgi puppets and carnival creations; and the Happy and Glorious musical spectacle.

Forming an important part of the pageant is the ‘River of Hope’ procession where secondary school pupils from across the UK will carry aloft 200 silk flags featuring artwork from children of their hopes and aspirations for the planet over the next 70 years.