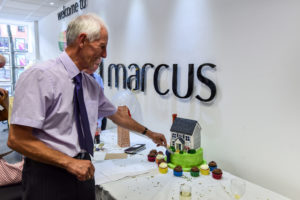 Geoffrey Hunt, branch partner at local estate agency Barnard Marcus in East Sheen, will mark a huge milestone by celebrating 50 years with the business on 1st August. A surprise party for Geoff recently took place at the branch for staff and customers, past and present, to enjoy this special occasion and to pay tribute to his long service.

Geoff, a respected estate agent and well-known face within the East Sheen community, started his career in estate agency back in 1968. According to Barnard Marcus’ press release, his first position was as a Junior Negotiator in the Barnes branch where he swiftly rose through the ranks to become Branch Manager, before joining the East Sheen office in 1986 where he has been serving buyers and sellers ever since.

In 1990, Geoff was promoted to Area Manager looking after the Teddington, Twickenham, Richmond, Kew and Barnes branches as well as running the East Sheen office but missed the cut and thrust of agency life and, in later years, returned to Barnard Marcus in East Sheen to head up the branch. 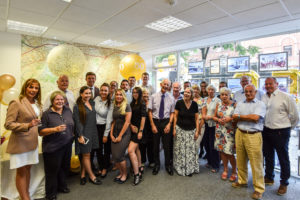 Although the estate agency business has changed enormously over the past 50 years – Geoff’s first job was to hand print property details on a traditional Gestetner printer and was one of the first local agents to introduce stick on black and white photos on the property details; the first house Geoff sold when he arrived in East Sheen was a three bedroom house on Coval Gardens for £155,000, now worth around £1.3 million – the fundamentals have remained the same.  Geoff believes that hard work, a sense of humour, great customer service and the ability to adapt to changing housing markets has seen his career stand the test of time.

“Barnard Marcus has been and still is a phenomenal place to work, and I am honoured to have enjoyed a career spanning five decades with them,” says Geoff.  “I am proud to have helped many repeat customers and families move many times within East Sheen and, by becoming part of the community, it has made this a hugely rewarding job.”