This week, Lucy is embracing a bit of misery eating coupled with laying down some fat for the forthcoming chillier months.

Is it me or is it a misery eating time of the year? 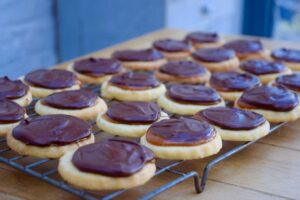 The momentum for being slim and showing off brown bits has passed and now I am just hurtling towards covering myself in jumpers, boots and bobble hats for the next 7 months. Depressing, maybe; exciting, a little, as I do love a new jumper for the winter and if I can wrestle a couple of quid from Ben’s university spending money, I shall look forward to buying one. It’s also the time of year for delicious and spoily after school snacks. Throughout September and often even into the start of October I feel quite virtuous and spend time making all the boys post school suppers from scratch. Filling them up with fresh vegetables and creating tasty sweet treats for them to eat when they walk through the door. Come the end of October and right through until July I will have given up completely and it will be fish fingers, pesto pasta and chocolate mini rolls all the way, but if you feel like striking while the iron’s hot, whip up a beyond tasty batch of Chocolate Caramel Twix Style Biscuits.

And my word, these little beauties are worth the calories. I had to sit on my hands in order to stop me inhaling most of the batch and to at least let the family get a look in. Poor Ben had already left for university by the time I made these, so he will just have to lick his laptop until I send some in a care package down to Portsmouth in a couple of weeks. What could be more tempting than soft but crisp shortbread, slathered in melted caramel then topped with the chocolate of your choice. These are a combination of Twix biscuits and millionaires shortbread, what’s not to like about that pairing and they are super simple to make. I had a lovely new pale pink mixer to make my dough. This made the shortbread making process super simple and quick and from then on it’s just melting toffees and chocolate and some light spreading. Each Chocolate Caramel Twix Style Biscuit is a sweet, chewy chocolate based mouthful. This recipe is from This Grandma is Fun, again, I promise I am not stalking her, with thanks.

After school, after dinner, after work, after you meant to be on a diet all day, it doesn’t really matter when you eat these or who you share them with. Sharing is optional, that goes without saying.

This recipe will appear on Lucy Loves later this week.

You will need a stand mixer and two lined baking trays 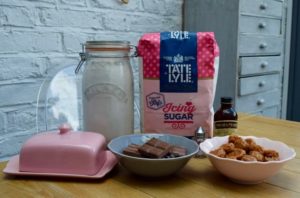 Make a start by pre heating your oven to around 150 degrees fan assisted and lining two baking sheets. 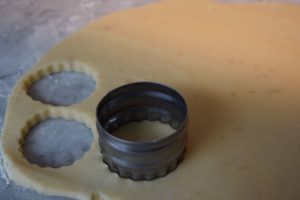 In your stand mixer or in a bowl and with a wooden spoon, beat together the soft butter and icing sugar until lighter in colour and texture.

Add the teaspoonful of vanilla extract, beat, then mix in the flour and salt until you have a soft dough. Turn the dough out onto a floured surface and roll out, with a floured rolling pin, to the thickness of approximately 1 cm. Using a small round cutter, cut and re-roll the dough until you have around 24 biscuits. Lay onto your lined baking tray and bake for 12 to 15 minutes or until golden and firm. Leave to cool slightly before laying onto a wire rack to cool completely.

Once cooled, add your toffees and chocolate to two separate bowls. 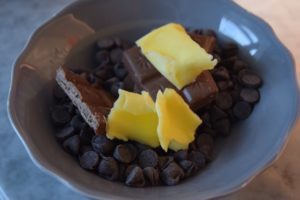 Starting with the caramel, working fairly speedily so it doesn’t firm up, add a generous teaspoon of melted caramel onto each biscuit and smooth with a butter knife. Leave on the rack to cool.

Repeat with the melted chocolate, spooning it on top of the caramel and levelling with a knife. Leave to set completely, if you can bear to, before devouring.

Store these in a cool place, but not the fridge or the chocolate will discolour, for at least a week.