This week, Lucy is reviving a warming Ango-Indian vintage dish, ripe for a delicious resurgence.

The nights are drawing in blah blah blah. 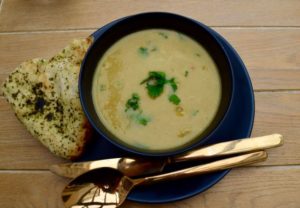 They are but there’s no need for me to bang on about it, as life is depressing enough as it is. The summer barely rocked up and now it’s over, so let’s just make the best of things. I quite like autumn, I feel all fresh starty and quite optimistic. I don’t expect that will last, however, when I’m walking the dog at 8am in the rain, when it’s barely light and my old lady nose is dripping away the minute I leave the house. What I love, however, is soup season. I could live on soup to be fair, it’s quick and simple to make, you can meddle with recipes to suit the mouldy selection of veg in your fridge and it always has the air of being healthy. With that in the forefront of my mind I have dug around in the annals of time and today bring you the recipe for the classic Mulligatawny Soup.

My Brother in Law, who I love dearly, has two favourite foods. The first being Prawns Marie Rose and the second, a curry house Mulligatawny Soup. We love to tease him about these but not because his faves are unpleasant we just love his retro 70’s choices and who doesn’t love a prawn cocktail? I had never even tasted Mulligatawny Soup, but felt in honour of my lovely Brother in Law, I would recreate his top dish and seek his approval. This vintage classic is beyond tasty and I can’t believe I haven’t tried it before. The vegetable base is thickened with red lentils, flavoured with madras curry powder and just a hint of mango chutney for sweetness. Shredded chicken is added at the end for a bit of texture to the creamy spiced soup. This is an Anglo-Indian recipe from days gone by, but it has a modern, light taste and I was eating it with a ladle straight from the pan. You can serve this with some naan bread to add a bit of ballast but it’s quite filling enough without. My inspiration for this dish came via The Guardian, with huge thanks.

I delivered a portion of my Mulligatawny Soup to my brother in law for him to critique and thank God, it got the green light from him. If he has said it was rubbish, however, I would have removed any reference of him from this post and just left him out of this tale of retro food love. Thankfully for him, and for Lucy Loves, this classic soup lives up to his Curry House favourite first course, so my tribute to him is intact.

This post will feature on Lucy Loves later on this week. 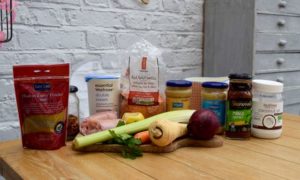 In a large high sided frying pan, with a lid, heat the coconut oil, or other oil until hot. Add the roughly chopped onion and cook for around 5 minutes or until softened and starting to brown. Add the carrot, parsnip and celery, season with plenty of salt and pepper, then cook off for another five minutes. 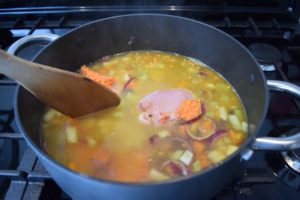 Stir in the ginger and garlic and cook for a minute or so before adding the curry powder and pinch of chilli flakes, stirring well. Drop in the chicken thighs, whole, and lentils then pour on the stock of your choice and bring up to the boil.  Turn down until simmering then put the lid on and cook for 30 to 35 minutes.

Once the time’s up, remove the chicken thighs to a plate, shred with two forks, then blitz the soup either in your blender or with a stick or hand blender. Stir through a squeeze of lemon juice, a teaspoon of mango chutney along with additional salt and pepper, if needed. Stir the shredded chicken, some freshly chopped coriander and the cream through the soup.

Serve piping hot, with extra coriander leaves to garnish and maybe some naan breads on the side. Any unlikely leftovers can be kept in the fridge for 3 to 4 days.