Terrified by technology? Not got a clue when your tv screen goes blank? 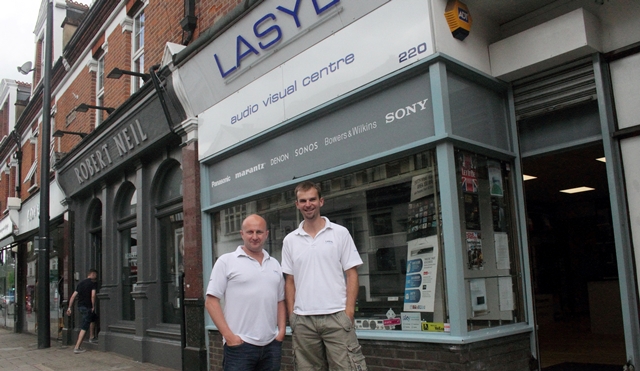 You need Lasyl, the Sheen shop with the unusual name, whose expert staff can bring your television back to life and then even go on to fit out your whole home with amazing plasma screens and stunning audio systems while they are at it.

“We install the stuff that people use every day and get great enjoyment out of,” explains Chris Hellel who runs the business with his brother Dominic.

“We’ll sell you an ordinary TV if that’s what you want, but we can also put in a home cinema with fantastic sound, TVs and wi-fi in every room, and a music system which gives you access to 15 million songs at the touch of a button.”

Technology holds no terrors for the brothers – they first started working in what was their dad’s shop when they were kids.

He started the business 30 years ago and the unusual name is easily explained.  It’s a combination of his name Larry, and his wife’s, Sylvia. Quite simple really.

“Though we worked in the shop on Saturdays and school holidays, after university I went off into banking,” explained Chris. “But after seven years and facing a recession, I got bored and dad said come back. Dom was already working for him and we have never regretted it.”

Sadly, their father – a well-known figure in Sheen – passed away last year, but under the brothers’ dynamism and expertise, their shop, which has just undergone a re-fit, and the services it offers are flourishing.

“A decade ago we were just a retail shop, but now we offer a full audio and visual refurbishment of your home as well,” said Chris.

This can range from a few thousand pounds up to a surprising £50,000 for the full works in a large house. One customer recently spent £9,000 on one room alone, putting in the finest sound system on the market.

“In West London there is a real demand for this service because many people have demanding and busy jobs. They haven’t got time to spend hours setting up a television or music centre, or wi-fi system. I do all the surveys and the quotes and Dom and our other staff, most of whom have been with us for many years, handle most of the installations. But we’ll do anything really, from just putting up a new aerial to putting in an extra socket.”

The speed of change in the visual and audio world means that they have to keep up with the technology which they do by attending training courses provided by major suppliers like Panasonic and Sony. They are also invited to demonstrations to be shown new products which are about to be launched on the market.

Much in demand currently is Sonos, a wireless audio distribution system used for listening to music and the radio around the home via the internet.

“We have fitted so many of these,” said Chris.  “You don’t need any CDs – I haven’t bought one for five years – or radios.  You just use the remote and have access to 15 million songs and 15,000 radio stations around the world.  It’s so easy to use.”

He predicts that the next big change coming to our homes is video-streaming via smart TVs connected to the web.

It sounds complicated. But one thing’s for sure – Lasyl and its staff will be on top of it