The official name is Villa Rosa but everyone in Sheen knows it as Rosa’s. 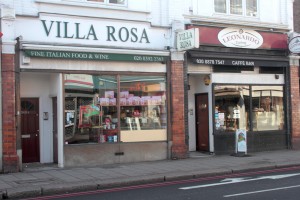 That’s because this traditional Italian coffee shop and delicatessen is run by a charming Italian lady called Rosa whose welcoming smile is legendary.

Rosa’s has the distinction of being the oldest coffee shop in Sheen, having been opened by Rosa’s brother Leo in December 1983.

It’s a much-loved meeting place for many local residents, some of whom have been calling in for a morning cappuccino or espresso and a browse through the morning papers for 30 years. 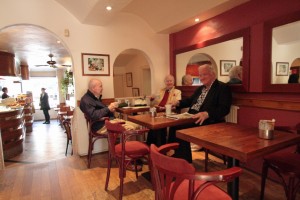 At Rosa’s it’s warm and cosy in the winter months when the cold winds blow, and in the summer there is a large outdoor patio at the rear where you can laze in the sunshine.

Also on sale are delicious cakes and pastries which are very hard to resist but which definitely enhance the experience.

So, with Rosa keeping a close eye on everything, along with her staff, it is no surprise that so many customers have stayed loyal for so long despite the lure of other coffee shops which have opened up along the Upper Richmond Road. 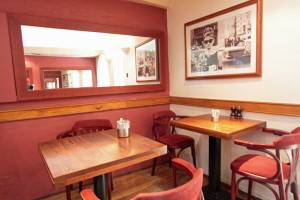 When asked for her secret, Rosa is typically modest.

“I just like the local people,” she says.  “They are all very very nice. There is no  secret. We serve good coffee with a smile and the customers come back.”

But before the current coffee revolution, it was not always so easy, as her brother Leo recalls. 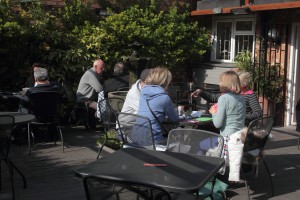 “We were the first coffee shop in Sheen and nobody believed it would work.  There was no tradition then of meeting up for a coffee. But we are from Italy where everyone drinks coffee and I was convinced it would catch on here.”

In those days Leo remembers a Lyons teashop in Sheen, but it closed down years before he opened Villa Rosa.

“We offered chocolates and cakes and were very busy right from the start,” he adds.  “Slowly we introduced a bigger menu, like pasta for lunch, panninis, take-out sandwiches and so on, and touch wood we are still going strong.”

The family hail from Puglia, near Bari, in Southern Italy, but employment was scarce and Leo moved to London as a young man. After some years living in Kensington he decided to move out to Sheen to open his own restaurant which he did in 1976 and which the family still run.

After her day job at the coffee shop, Rosa heads straight along to the restaurant every evening to help her brother.
Recalling his decision to move to Sheen, he says:”I picked it because it has a really friendly atmosphere – it’s like a village really.  And I’ve seen a lot of changes. Very few of the original shops are still here – most have changed hands many times.”

But Villa Rosa is still going strong, helped by the fact that almost everything sold from the coffee counter and the delicatessen comes from Italy. “Our coffee is Colombian but it is blended in Italy,” said Leo.

And with his hard-working sister at the helm, it’s pretty safe to predict that the future is looking rosy.