Age UK Richmond are excited to host the engAGE Music Festival 2019, in association with East Sheen Village! Held at the Barnes Home Guard Association in East Sheen, we aim to involve the local community in supporting their local charity for older people.  A great afternoon for all including a fabulous line up of local bands, stalls of local independent businesses, BBQ, online auction, fun photo booth, plus more – plenty to keep the children entertained (and the adults of course!).  We hope to raise much needed funds so we can keep supporting older people in need in the borough, so book your tickets and engAGE with us!

The fabulous lineup for the day is as follows:

Southland
Southland is a local band playing covers of their favourite blues and rock songs. They’ve been rocking crowds in and around Richmond since 2015 playing at charity events, school fairs and music clubs.

The Café Racers
Named after British bikes from the 50’s & 60’s with clip-on handlebars & single seats, evoking memories of rock’n’roll, rockers and coffee bars. The band play hot rhythm & blues from this golden era, with just a little rock’n’roll on the side… just for good measure. 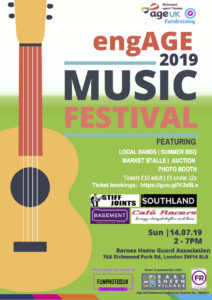